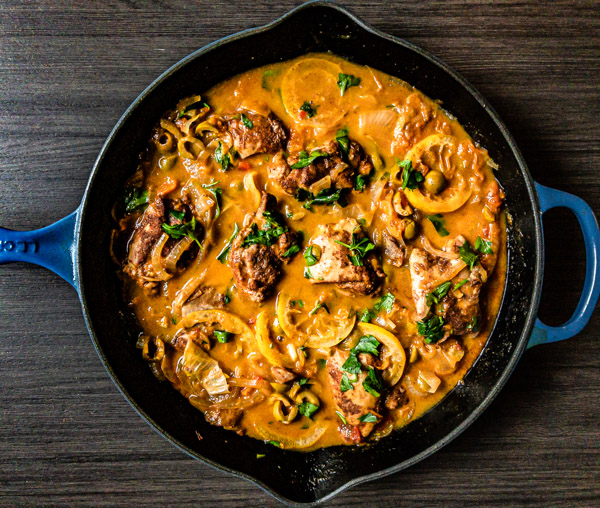 If you are not making dishes with stone fruit this time of year then you are missing out! They are absolutely on point right now. Apricots, aka mish mish in Arabic, are a personal favorite. It is rare to find a fruit that reaches its full potential cooked rather than raw, but apricots are one of them. They are great in both sweet and savory dishes.

This Moroccan spiced chicken consisting of a blend of cinnamon, cloves, coriander, paprika compliments the tang and slight sweetness from the apricot and lemon. Bye bye boring chicken recipes. This dish is wildly flavorful and will have others asking you to make this dish on repeat.

A blend of cinnamon, cloves, coriander, paprika and the tang and sweetness from the apricot and lemon make this dish widely flavorful and will have others asking for more!
Course: Main Course
Cuisine: Middle Eastern
Keyword: apricot, chicken, lemons, moroccan, spices
Servings: 5 people

* If you are not able to find fresh apricots, dried apricots work well too! If using dried apricots increase quantity to 10. ** My cast iron did not come with a lid. I used a lid from another pan that roughly fit – still did the trick!