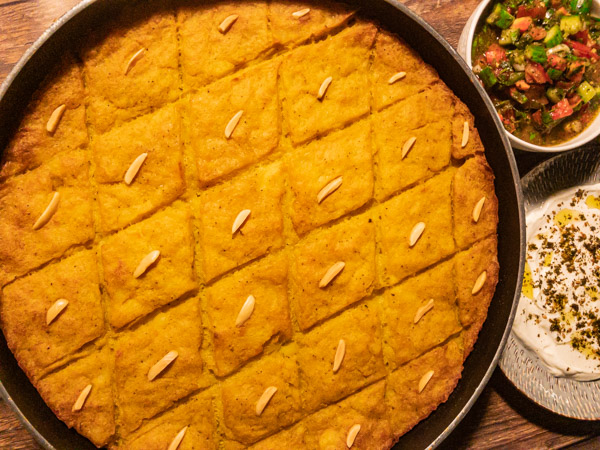 In my husband’s family, Potato Kibbeh needs no introduction. I mean, can you get any better than spiced meat sandwiched between layers of silky potato? It is like the Middle Eastern version of Shepard’s Pie. What makes it taste Middle Eastern you ask? The spices! The potato has light notes of curry and turmeric. The meat has spices that really complement the flavor – nutmeg, all spice, cinnamon, turmeric, curry. Imagine cutting through those golden layers with your fork – absolutely delicious!

Anyways. You know the moment when you open your mom or grandma’s door to their house for dinner? And with one whiff, you have an idea of what’s to come? What a treat it is to open the door of my in-laws house (Majedah) and get a whiff of the Kibbeh in the oven. My mouth waters just thinking of it!

The majority of time spent making this dish is the cook time in the oven. It is done cooking once the top has achieved a deep golden color. During that time you can prep an Arabic Salad which would be a great side dish to the meal or just hang with the family. We often eat this dish with a side of labneh (or greek yogurt.)

BAM, there you have it, Shepard’s Pie in the Middle East. It a dish you never knew you needed in your life, until now.